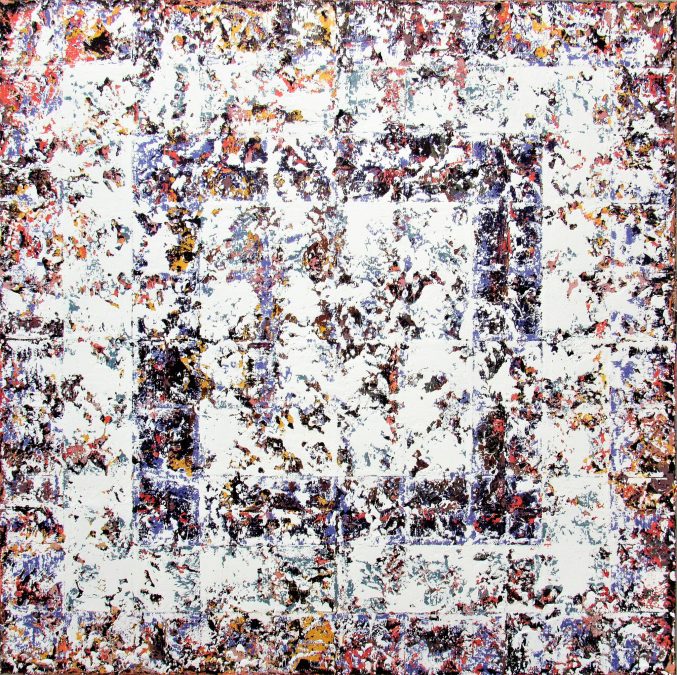 The ‘White Square’ series is the latest iteration of Brian’s passion for rendering multiple layers of oil colour upon canvas or board, a process he began in earnest back in 2011. Previously, his larger abstract works would tend to be resolved after approximately two years, and culminate in studies of highly coloured panels, or patterns or rotating shapes with dramatic tonal contrasts.

These ‘White’ Paintings are much more substantial and emerged as a result of having to address a practical problem concerning space in his studio. Over the years, some paintings never quite managed to become resolved, and consequently remained leaning or stacked up in his storage area. From time to time he would work on them, and they would be left again.

As a result, the array of colours and depth of paint building up upon them become considerable. Some canvases had been started as early as 2012 but he felt very reluctant to discard them. Eventually, having become frustrated with a lack of space, he decided to bring some of them together and look at them with a fresh perspective. Perhaps applying yet more colour on top would not be the answer. Perhaps a neutral or ‘non-colour’, like white, might help to bring unity and calm to surfaces raging and boiling with contrasts and seemingly out-of-control surface texture.

As an additional device he decided to deploy a grid to organise applying the white to the surface. He felt that this would lend some structure and depth to each painting’s motif. As the white went on, he realised the grids gave the opportunity to vary each painting’s ‘look’ and character. To his delight he noticed that white not only brings a sense of calm to the paintings, it also seemed to cleanse them. The clashing kaleidoscope of colours underneath seemed to show up better and with more clarity. The topography of the older hardened surface dictated where the white would and wouldn’t go, it was if the paintings started to paint themselves and he was merely a facilitator.

Happily, the resulting works fulfill his deeper needs to express ideas about Time, memories remembered (and buried) and layered experience, a flowering of his notion of ‘Noble Decay’.