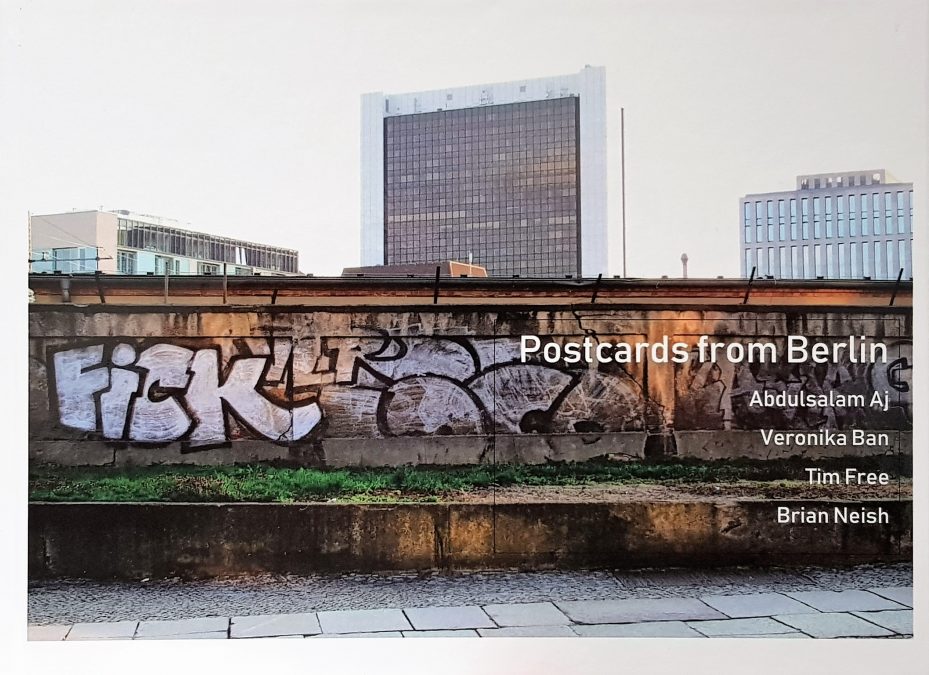 THE TIMELAPSE PROJECT is delighted to announce that the ‘POSTCARDS FROM BERLIN’ book will be available for purchase (£14.95) from THE HAYWARD GALLERY SHOP during the forthcoming ‘diane arbus: the beginning exhibition’ from 13th Feb – 16th May 2019.

In the ‘Postcards from Berlin’ book, four artist members of The Timelapse Project have attempted to capture through images and text, the notable period of Berlin’s development following Reunification. A time during which it ‘catches up’ with cities that have avoided the impediments of political, social and physical division. Berlin is a world city of culture, politics, media and technology and the most populated city on the continent of Europe, with nearly 4 million inhabitants. It is emblematic of the reunification of Germany following the fall of its infamous Wall.

The Timelapse Project, first conceived by Brian Neish and Tim Free, is a public art project that has been showing work and exhibiting in the UK for a number of years. It is based on the spirit of the UK’s Mass Observation Movement (1937-1950s) that sought to generate material records of the everyday lives of people and their environment, in both urban and rural communities. In the same spirit, observations made by Timelapse participants are expressed through images and text, and attempt to comment on contemporary society and express some ideas about the times we are currently living in. The aim is to use observation to reveal truths about our lives found in everyday details as opposed to impressions a tourist might form expecting to see what they see.

Joined by Abdulsalam Aj and Veronika Ban, the Berlin Timelapse Project began in May 2016 and culminated in the publication of this book in October 2018. This iteration of the Timelapse Project explores the concept of the traditional postcard as a means of communicating moments in time, without nostalgia, and hints at new ways to look at aspects of life that never seem to change when change seems to be all around us. The aim is to capture a pivotal moment in Berlin’s development as a city. As always within a process of significant change there are risks attached. The images for this book are intended to invoke a deeper sense of this moment for Berlin, with text used to make connections to time, history, place and human understanding.

The old adage of getting the real sense of a city by walking its streets. Looking up, beyond the tick-box vistas. Shrouded history within the stone and brick. The tourist periscope, perhaps a light 360-degree scan of the horizon, before slipping below the imagined surface …

The Timelapse Project is currently exploring possible venues in Manchester, London and Berlin to show the original Berlin work from 2020 onwards. For more details please contact Brian directly at brian.neish@googlemail.com

A recent article titled ‘Postcards from Berlin examines the idea of being an outsider’ was written by Emilio Gosling and published on Creative Boom (April 2019). Creative Boom is an online magazine that was established in 2009 and set up to celebrate, inspire and support the creative community across the UK and beyond. To read the article please click here