30 YEARS ON: BRIAN NEISH Solo Exhibition at The University of Winchester (May 2015) 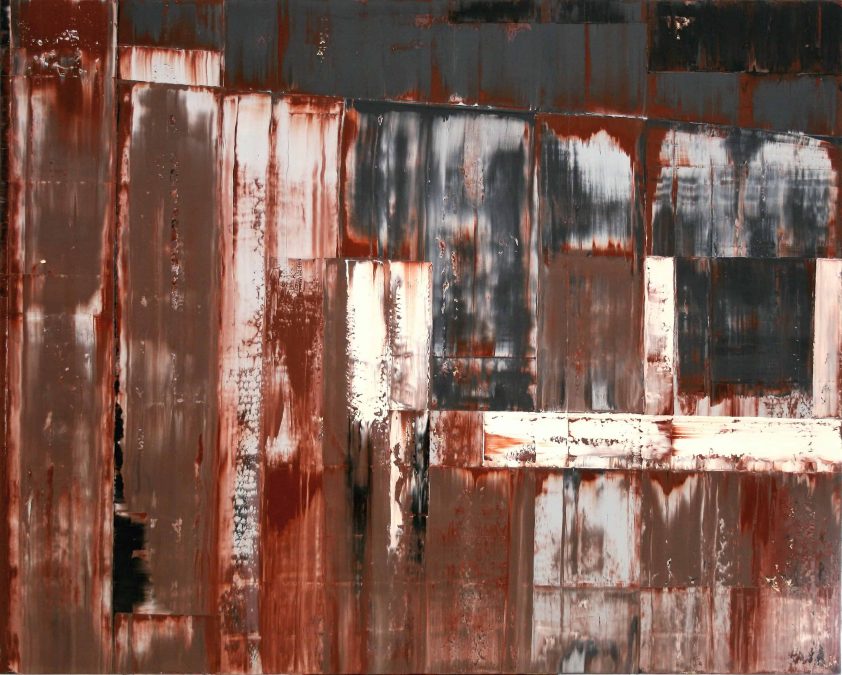 AN INTRODUCTION TO THE ‘JOURNEY’ EXHIBITION BY LAWSON BELL

We invited Brian Neish to be one of our artists towards the end of 2010. I had been aware of his work and keeping a keen eye on his progress for a few years when he had been splitting his years in half: teaching part-time at the University of Chichester as a subject leader in Art Education then working in his studio in France.

It was clear that during this period he was deeply into experimentation with paint. Initially he was making references to the woodland surrounding his house and studio. The Dordogne valley in France is wide and flattened out, and Brian became interested in the way local farmers would plant poplar trees in regular rows, evenly spaced out and rigorously executed. This spacing of broadly vertical ‘forms’ became something he worked with, and used, to reacquaint himself with the plastic qualities of oil paint and its possibilities.

When he started to show up with more purely abstract pieces we were just moving into our premises at Store Street and we instinctively realised this newer, bolder work would suit the gallery and complement the work of our other artists. The references to trees and landscape had disappeared and he was now working with flatter imagery generated by serious and concentrated layers of oil colour. This gave his work a rather special and unique quality, and qualities that persist to this day. These paintings made references to old, decayed, architectural features such as doors, shutters and especially utility panels on the sides of people’s houses, particularly in rural Italy and France.

The shape of one of these panels would be appropriated then incorporated into a composition that loosely referred to the source. He would then start to work up a surface, alternating layers of either strong complementary colours, or boldly contrasting tones, sometimes shifting the composition around, even radically changing it. As each layer became assimilated onto the surface the expressive power of the textural surface grew, and started to assert its own influence upon the process. Some even modestly sized paintings used to take some strength to carry and lift onto a wall space due to the sheer quantity of paint that had gone into their rendering.

More recently he has developed an interest in diversifying his techniques and approaches, as much as a personal challenge as anything else. He is never still, always moving forward, always wanting to push the limits of how paint might behave, react or refer to something he has seen. In September 2012 he toured the south west United States and acquired a completely new and exciting databank of decaying and fading surfaces: walls, pillars in abandoned gas stations, rusty garage doors, timber strips on disused sheds.

I know he refers to his interest in these surfaces as ‘Noble Decay’. His point is, I think, that some objects acquire a deeper beauty after long exposure to the elements than their appearance when new, and should be valued as such. So his work expresses something about Time and letting things be. Whether you know this or not, however, his paintings have their own beauty, and we are delighted to continue making their acquaintance.

A selection of pieces from the Journey show can be seen below. All works are for sale, please contact Brian for prices and further details.