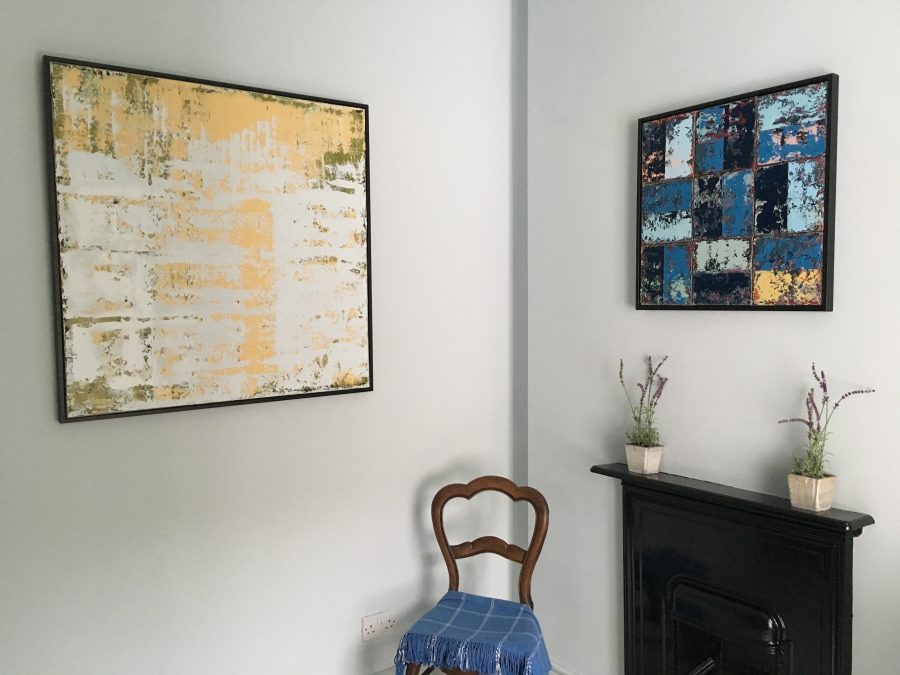 The recent lockdown has meant that we’ve all spent and are spending much more time at home than usual. Consequently, we thought it might be fun to share a few views of Brian’s work in their owners’ domestic settings. An armchair view so to speak! Paintings are so often first displayed and selected in the more austere environment of the gallery. However, it is most frequently in the comfort of our own home where we will enjoy a painting day in and day out.

Room With A View

These two paintings both come from Brian’s ‘Spring Bank’ series. ‘Spring Bank #3’ and ‘Spring Bank #9’ were purchased by the same person. They are now hung together in their living room which has views across the South Downs, Hampshire. The ‘ Spring Bank’ series was painted in 2018. This was four years after Brian returned to his county of birth, setting up his home and studio in Derbyshire. Once settled in the High Peak, he felt a strong urge to reflect something of the local environment in his work.

Once again both these paintings were chosen to be enjoyed together. A family in Cheshire are now enjoying them. ‘Pahrump’ (2013) was originally shown as part of Brian’s solo ‘Journey’ exhibition at Store Street Gallery, London. The exhibition of work was inspired by Brian’s tour of southwest United States in September 2012. It was during this trip that he acquired a completely new and exciting databank of decaying and fading surfaces: walls, pillars in abandoned gas stations, rusty garage doors, timber strips on disused sheds.

While the second painting ‘Fading Away #1’ (2016) was developed sometime later. It is a composite made during Brian’s process of investigating rotations of shape. This was ahead of the ‘Deepest Harmony’ series developed for the Ivy Brown Gallery, New York City (USA) in 2017. In this instance, the composite pieces were painted onto small canvases and then retained in a frame.

This ‘Colourscape #61’ (2017) gives a wonderful burst of colour, complementing the understated, subtle tones of this interior. The flat is owned by a couple in London. Back in 2017, Brian originally started the first ‘Colourscapes’ as colour studies for the ‘Deepest Harmony’ pieces. However, the studies quickly developed into a standalone series. The ‘Colourscapes’ explore visual and spatial dimensions, celebrated through the spontaneous use of colour and texture. These are small canvases at 26 x 30cm. They can be selected as individual paintings or can be presented together. They create their own dialogue as groups of two, three, nine and more.

‘Zero Hour’ (2011) has found a home in Hampshire. Brian created this painting during the time he spent living and working in France. He had become somewhat obsessed with ageing fire hydrant panel/covers in Italian hilltop towns. This was while he was on a visual research trip to Italy in 2008/2009. Brian appropriated the ‘device’ to develop new work exploring line, shape and surface texture. It was during this period he declared the term ‘Noble Decay’ to encapsulate a sense and feeling about old, crumbling, multi-layered paint surfaces. Paint surfaces found on architectural features surviving the deleterious effects of weather and Time.